Looking to sell a house in a divorce?

This brief overview will give you a quick overview on how to sell a house in a divorce. This is not legal advice.

Note: if you’re not sure you want or need to sell your house, but want to learn more, you should also check out my article on what happens to a house in a divorce.

Most of us know the sad stat: around half of marriages end in divorce. It is a stressful and often shameful situation, but it happens to good people.

Going through a divorce doesn’t mean you’re a failure, or a bad person. It just means you and your partner can’t get along.

And that’s fine…divorce often solves that problem. In fact, my parents fought like cats and dogs while they were married. But they got along great as soon as they got divorced!

Most people, both men and women, going through divorce want to move on with their lives. It is true that some are vengeful, and want to damage their ex-spouse as much as possible.

The longer the couple has been married, the more traumatic and messy the situation is. Longer marriages tend to have children involved, savings and joint property.

In most situations, the couples are not on equivalent footing. For example, in some states, women have primary claim to children. One of the spouses probably earns the majority of the household income, usually the man.

Thus, even in the most amicable divorces, disagreements will be common. Let’s face it: dissolving a legal union of any sort is incredibly difficult.

One of the first things divorcing couples will think about is the house. Many times both members of the couple will assume they’re keeping the house while the ex moves. Other times, both will want to make a clean break from the past and to get rid of the house.

Whether your partner is cooperative, or the second incarnation of Damien, I am going to teach you how to sell a house in a divorce in a rational, easy manner. 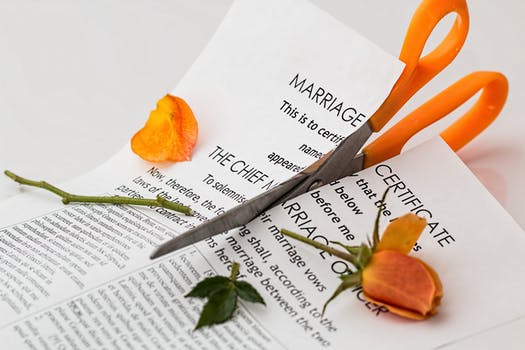 Why sell a house in a divorce?

There are many reasons divorcing couples will consider selling their house.

1. The family net worth is tied up in the house.

When they first start off, couples are happily rowing in the same direction. They read financial advice that says to pay off their house as soon as they can. This is supposed to make them financially independent.

They dutifully put their extra paychecks each month to pay off the mortgage. Or they’ve lived in the house for a few years, and the house is worth a lot more due to appreciation.

This equity in the house will usually have to be split in a divorce.

If the couple has $50,000 in the bank, one spouse may take the cash, while the other takes the home (and its equity). They both walk away with $50,000. If the couple doesn’t have any cash in the bank though, how are they supposed to split the $50,000 equity they have in the home? They may have to sell the home.

2. Cannot afford the house on a single income

If one spouse wants to keep the house, he or she will not have the other’s income to help pay the mortgage. In most situations, the person keeping the house will have to be refinance it (to get the loan in one person’s name).

The banks won’t give a mortgage to the spouse remaining in the house if he or she doesn’t qualify alone. In this case, even though both people agree that one will keep the house, the bank has a say.

The bank can, in effect, veto the plan because the spouse cannot afford the payments.

Under current tax law, a married couple doesn’t pay capital gains taxes on the first $500,000 they make in profit when selling their primary residence. That exclusion is only $250,000 for a single person.

That means if there has been significant appreciation, it benefits both members of a couple to sell their house before finalizing a divorce.

4. You want a clean break

A house has ghosts, even houses that aren’t haunted. There are significant emotions tied up in a home that a couple has shared for years, worked on together, and raised their kids in.

Their best times and probably their worst times as individuals and as a couple happened under that roof. It is emotionally stressful for many, even unhealthy to stay in a house after a divorce.

Selling the house is therapeutic and can help both spouses of a failed marriage move on with their lives.

Let’s face it. Many marriages end because there is violence or threat of violence. Even if that is not the case, many people don’t want their ex to be intimately familiar with where and how they live.

You can change the locks on the door, but is that enough to quell fears of someone being stalked or monitored?

There are many reasons one spouse might want to stay in the house. For example, to avoid disrupting a child’s schooling.

Oftentimes the departing spouse will agree to pay a percentage of the mortgage in exchange for some other concession. If there are trust issues, this might not be a risk worth taking.

How to sell a house in a divorce

Once the discussion about the house comes up during divorce proceedings, the couple should follow the following steps to resolve the issue:

If one person in a splitting couple is keeping the house, one spouse will essentially sell their claim in the house to the other spouse.

Work with a lawyer or accountant to do this, because the departing spouse will probably take the money from a joint account.

As mentioned above, this is only really an option if the couple has enough cash so that one takes the house while the other takes the equivalent monetary value in cash

Both names of the married couple are likely on the mortgage, so they’ll have to talk to the bank about removing one name from the mortgage.

Many banks won’t allow this, and unless the departing spouse wants to remain liable for the mortgage payments for a house he or she doesn’t own, they’ll have to refinance the house with a new loan in the remaining spouse’s name.

If the couple doesn’t have enough liquid assets to split along with the house, they’ll have to split the equity in the house, and sell the house. As long as the couple is working together and communicating, this should be pretty straightforward.

However, if the couple is at war, this could be a very difficult challenge. It’s in the best interests of the couple to get the highest price possible, even if they can’t agree on anything else.

If the divorcing couple owes more than the house is worth, they’ll either have to work out an arrangement to keep the house, or get the bank to agree to a short sale.

A short sale is when the owners sell the house for less than it is worth. The owners lose all their equity, but the bank loses money as well. It’s not easy to do but it is an option that may be necessary.

We help those who want to sell a house in a divorce do so in a quick, respectful, discrete manner.

If you’re going through a divorce and need to sell your house, please contact us and see if we can help.

Disclaimer: This post is for informational purposes only and does not provide legal, accounting, or financial advice. I am not a lawyer or accountant. Visitors should not rely upon this information as a substitute for legal, accounting, or financial advice. While I make every effort to provide accurate website information, laws can change and inaccuracies happen despite our best efforts. If you have a specific problem, you should seek advice from a qualified professional in your own jurisdiction.